The theme of trailblazing has followed Arthel repeatedly in her unmatchable career in journalism, as well as on the syndication and entertainment front.

• In 1991, after seven years as a reporter and anchor in local news, Arthel landed a national spot with the newly launched E! Entertainment Television. She hosted and produced Extreme Closeup, a one-on-one celebrity interview show. With this she became the nation’s first high profile African American female entertainment reporter. Four years later Arthel launched Extra. With this bold move, she would become the first African American female to front a nationally syndicated entertainment news show. Arthel brought her yet-to-be-seen engaging, witty and smart style to millions of viewers nightly.

• While at the Fox News Channel, in 2002, Arthel was personally asked to join the ranks of CNN by CEO Walter Isaacson. She became the first African American female to host her own signature show on the network, Talkback Live with Arthel Neville. While at CNN she also co-anchored with Anderson Cooper.

• Other professional highlights include: Being hand-picked by Dick Clark to be his co-host of the Miss Teen USA Pageant, co-hosting the Miss Universe Pageant to a worldwide audience of over 60 million viewers, and being selected as the third African American female to be inducted as a Distinguished Alum at University of Texas at Austin. Arthel is proud to have had iconic journalist Ed Bradley as a career-long mentor.

With a passion for storytelling fortified by her producing skills, Arthel is perched to take off on the next phase of an already significant career. A longtime trailblazer, Arthel shows no signs of stopping. 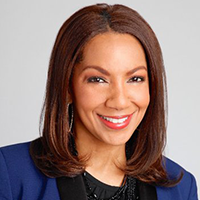