Jeff is Executive Vice President T-Mobile US, Inc. and was the co-founder and CEO of Layer3 TV, a next generation cable company, founded in 2013 and acquired by T-Mobile USA in January of 2018.

Prior to Layer3 TV, Jeff was a general partner at Genovation Capital, a stage-agnostic private equity and venture group focused on Technology, Media and Telecom and served as an advisor to TPG and Silver Lake, two of the most respected names in private equity. In the early 2000’s, Jeff led Broadbus Technologies as its founding CEO, to become the leading supplier of cable industry on-demand video technology. Motorola purchased Broadbus for $200 million in 2006 and Jeff joined company as a senior executive spearheading several key initiatives, including Photon, the predecessor to the Droid.

As CEO, Jeff led the Leading Golf Companies from 1996-2000, then the largest marketing and technology network of high-end golf courses in North America in partnership with American Airlines and a joint venture with Jack Nicklaus. Prior to LGC, Jeff was founding CEO of Nanosoft, a leading digital design and development firm with offices in Chicago, Seattle and Beijing. Jeff’s first entrepreneurial venture was Magic Music, which pioneered memory based duplication systems accounting for more than 30% of the world’s audio cassette production across 15 countries on five continents. Jeff began his career as a financial futures and options trader at the Chicago Board of Trade.

Jeff has been named a Next Generation Leader by MultiChannel News, a Top 100 Heavy Hitters by CableFax and 40 under 40 by the Boston Business Journal. A graduate of Harvard University, Jeff studied Government and Environmental Science. 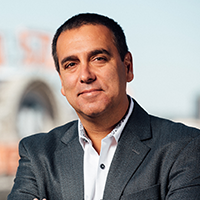