NY Emmy Nominated Television Host Evi Siskos was born in the heart of New York City to Greek and Dominican parents. She graduated with a bachelors in International business. Évi is a polyglot with a strong passion for languages. She is fluent in English, Spanish, Greek, French and studied Mandarin in Shanghai, China. Since 2011, Évi has been in various commercials, television programs, music videos, short films and voiceovers. Ms. Siskos also forms part as one main hosts of the daily entertainment show, Acceso Total, on Telemundo Monday thru Friday. Recently her love for travel led her to write a cookbook titled Vegan for Non-Vegans, which includes her very own recipes from around the world turned vegan. 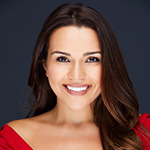