A long time journalist, Phillip Mena joins the NBC News Group from ABC News, where he served as a correspondent appearing on World News Tonight with David Muir and Nightline. Some of his work during his tenure with ABC includes: coverage of the Dakota Access Pipeline protests, tornado outbreaks along the Gulf Coast, and an interview with Olympic-gold medalist Simone Biles.

A Texas native, Mena began his career in his hometown of El Paso, TX, as a multi-media journalist at NBC-affiliate KTSM-TV. He quickly moved up the ranks to anchor, reporting from across the region on the drug cartel war in Mexico, the Deepwater Horizon oil spill and the trial of CIA-trained Cuban exile Luis Posada Carriles. In 2012, he left El Paso and became the weekend anchor of KPRC-TV in Houston, TX.

Mena is a 2008 graduate of Walter Cronkite School of Journalism and Mass Communication at Arizona State University where he received a bachelor’s of arts in broadcast journalism. From years of reporting on the topic, Mena has developed a keen interest in astronomy and NASA, even joining the Houston Astronomical Society. He currently lives in New York City with his golden retriever, Toby. 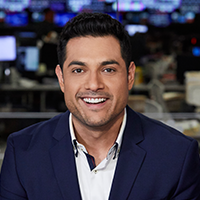