Full Name
Joiava Philpott
Job Title
NAMIC Vision Award Recipient | Chairperson of the Board & Vice President, Regulatory Affairs
Company
NAMIC & Cox Communications
Speaker Bio
Joiava Philpott is Vice-President of Regulatory Affairs for Cox Communications, the third-largest cable provider in the nation, headquartered in Atlanta, GA. She is responsible for overseeing the development and implementation of regulatory strategies impacting voice, video, and broadband products. In this role, Joiava also provides legal counsel to internal business clients concerning the rights and obligations of Cox in the provision of all cable, broadband, and telecommunications services. She leads Cox’s policy and advocacy efforts before state regulatory agencies and provides support in relation to proceedings at the Federal Communications Commission.

Prior to joining Cox, Joiava served as General Counsel of AstroTurf, LLC and also worked for Charter Communications, Inc., as its Corporate Vice-President and Senior Counsel of Government Affairs While at Charter, she was selected to represent cable operators and provided testimony on a panel before the FCC on the subject of “Video Competition.” Before joining Charter, Joiava was with KMC Telecom, as its Assistant General Counsel. She began her career with the City of Atlanta Law Department advising the mayor and city council on public rights-of-way management and cable franchising regulations.

Joiava has served in various capacities and held leadership roles with numerous professional and community service organizations including the Federal Communications Bar Association (FCBA), National Association for Multi-ethnicity in Communications (NAMIC), Board of Directors Network, Women in Cable & Telecommunications (WICT), American Corporate Counsel Association, Girl Scouts of Greater Atlanta, Georgia Association of Black Women Attorneys (GABWA), Georgia Campaign for Adolescent Power and Potential (GCAPP), and the Fulton Academy of Science & Technology. Joiava has been recognized as an In-House Woman of Color to Watch by Diversity & the Bar Magazine and amongst The Most Influential Minorities in Cable by Cable Fax Magazine.

She received a B.S., in Business Management from Hampton University, and her J.D. and M.B.A. from the American University, in Washington, DC. Joiava is a BMLI fellow of Women in Cable & Telecommunications (WICT). She completed an Executive Education Program at Harvard University, John F. Kennedy School of Government, as well as the NAMIC Executive Leadership Development Program at the University of Virginia, Darden School of Business. 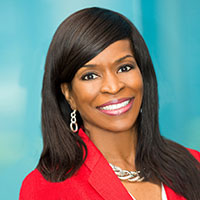