Society of Voice Arts and Sciences

Joan Baker is the author of Secrets of Voice-Over Success (proceeds benefit the Alzheimer’s Association) and monthly VO columnist for Backstage Magazine. Joan’s a co-host of the biweekly podcast series called “Get Out There” featured on Backstage magazine online. Joan is the national spokesperson for world-class microphone, Sennheiser/Neumann. She is the co-founder/producer of That’s Voiceover!™ Career Expo, which is now part of the Society of Voice Arts and Sciences (SOVAS™), along with the Voice Arts® Awards. Ticket sales benefit The Muhammad Ali Center (for under-privileged kids).

Joan‘s also the winner of multiple Promax and Telly awards for commercial and documentary voiceover performances and content producer.

Kickin’ it live as the “Voice” for numerous entertainment industry award shows and conferences including Promax /BDA Conference, NYWIFT's Muse Awards, The Vision Awards, The Moving Image salute to Will Smith and Julianne Moore and the Woman and Communications’ Matrix Awards, The Red Dress Awards and many more. Joan is an actor, voice actor, and teacher. A much sought after educator, she is responsible for training a respectable number of new voice talents entering the voice-over field each year and provides private voice coaching for corporate executives and other non-entertainment professionals seeking to enhance their public speaking skills for stage and on-camera.

Among her list of clients are, Miss New York to Miss America 2013, the late Johnnie Cochran, TV host, Nancy Grace and Fortune 500 companies… 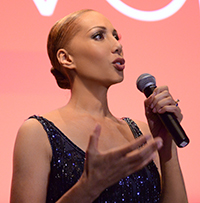