Full Name
Ojinika Obiekwe
Job Title
Entertainment Reporter
Company
PIX11 Morning News
Bio
With a career in television that has spanned nearly two decades, Ojinika Obiekwe is a Nigerian-born Emmy award-winning journalist who has interviewed people from all walks of life - including A-list celebrities, politicians and the news-makers of our time.

Born and raised in Enugu, Nigeria – Ojinika is the second of five children. At the age of 16, after graduating from high school, she moved to the United States for college where she studied Communications at Seton Hall University.

A chance encounter brought her to New York’s WPIX-TV (PIX11 News) as an intern...fast forward nearly two decades later, she's gone  from Intern to Assignment Editor to Producer and now the Entertainment Anchor.

Oji knew being on camera would be her next move after she was awarded a fellowship in 2007 by the National Association of Black Journalists – to report in Senegal, getting her first chance to be on-camera as a reporter. “After that piece on my Senegal trip aired, I just knew that I’m right where I’m supposed to be, doing what I was meant to do and I count my blessings every day. Okay, maybe not every day, but a lot!”

As the Entertainment Anchor for PIX11 News, Ojinika takes center stage interviewing some of Hollywood's biggest names which include the likes of Oprah Winfrey, Robert Deniro, Julia Roberts, Denzel Washington, George Clooney, The Rock, and many more.

An experience she says “can be surreal sometimes - “I knew I wanted to be a journalist, but that dream never went farther than print journalism; I figured I’d graduate and write for some paper, but luckily fate took it’s course and I ended up here and I honestly couldn’t think of anything I would rather be doing as a career, except ofcourse being a Victoria’s Secret model (I hear they get free underwear).

“The best part of my job, I think is the fact that not only am I great at what I do, I also realized that through this, I can reach so many people and touch many lives, especially women; not just here in the U.S. but also in Nigeria, the entire continent of Africa and hopefully all over the world. 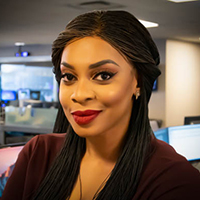