A pioneer in digital over-the-air broadcasting that helped to usher in the ‘cord-cutting’ movement, Ravi owns and operates television stations in San Francisco, Chicago, Orlando and Fargo that showcase more than 50 program streams of major network, sports, news and minority-focused content. He is the first Indian-American and only working journalist to own a full power television station in the United States.

He led KAXT to its first-ever Emmy award in 2013 and nomination as Television Station of the Year by Broadcast Engineering in 2010. Diya TV is now the largest South Asian broadcast television network in the nation.

Before venturing into entrepreneurship, Ravi was an executive for mobile and streaming media
startups in Silicon Valley and served as an anchor, reporter and producer for ABC, CBS & NBC affiliates in Northern California, Oregon & Tennessee. The stories he enterprised changed local laws, altered big business practices and held area politicians accountable.

He was asked by National Association of Broadcasters to give expert testimony before the United States Congress on the preservation of free, local television. Ravi has also addressed the Federal Communications Commission on the Impact of New Media on Broadcast Stations, on measures on how to increase diversity in broadcast ownership, and how to inculcate Digital Inclusion in the 21st Century during the Commission’s #Solutions2020 policy forum.

Awards & Recognitions:
In 2013 Ravi received the NAB Broadcast Leadership fellowship.
In 2016 Ravi was inducted into the MMTC Hall of Fame
In 2017 he became the recipient of the UCC’s Donald H. McGannon Award in recognition of special contributions to advancing the role of women and persons of color in the media. 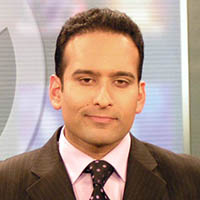